Aqua-SlotTM offers a durable, effective drainage solution for the M6

In their quest to find a suitable drainage solution, which can be rapidly installed at their M6 J13-J15 upgrade scheme, Kier Highways worked closely with Stanton Bonna to develop an offsite linear drainage system called the Stanton Bonna Aqua-Slot TM Drain.

Kier Highways was faced with a challenge in their M6 J13-16 upgrade. Their traditional manufacturing method for surface water slot drains used in-situ concrete slip-forming, a process which can be considerably time-consuming, leading to significant delays due to the extended partial highway closure, and vulnerable to weather conditions. In-situ concrete also meant more trades, deliveries, traffic, and workforce on site. Kier Highways wanted a solution that enabled them to have more control over the project’s time and schedule. It was evident to Kier Highways, especially after discussions with Stanton Bonna Business Development Manager, Neil O’Sullivan, that an offsite solution was the way to go.

The discussion with Stanton Bonna led to a decision to replace the in-situ concrete slipform system with an offsite precast concrete system which can be mass produced and rapidly installed for such Motorway upgrade schemes. The M6 project was just a start for such a new system in constructing slot drains in highways.

As the scheme required up to 31km of Aqua-slot TM Drain, it was necessary to get early input from the client, design team and Stanton Bonna, allowing mass production to start far ahead of on site installation. The factory production programme was tightly aligned to the scheme’s requirements. As the Aqua-Slot TM Drain units are manufactured in Stanton Bonna’s factory in Derbyshire, the central UK location was ideal for the direct, just in time delivery to site. The units were then rapidly installed on site at a speed of around 200m per day, with almost no delays due weather conditions.

Kier Highways’ project director, Richard French, was very pleased with the offsite winning formula employed with Aqua-Slot. He noted that the “…Outputs are better than expected and we are very pleased with the product. Any reduction in trades and numbers in what is a very constrained environment has to be seen as a positive”.

Find out more about the Award winning Aqua-slot, from Stanton Bonna, here: https://www.stanton-bonna.co.uk/drainage-systems/aqua-slot-drain/ 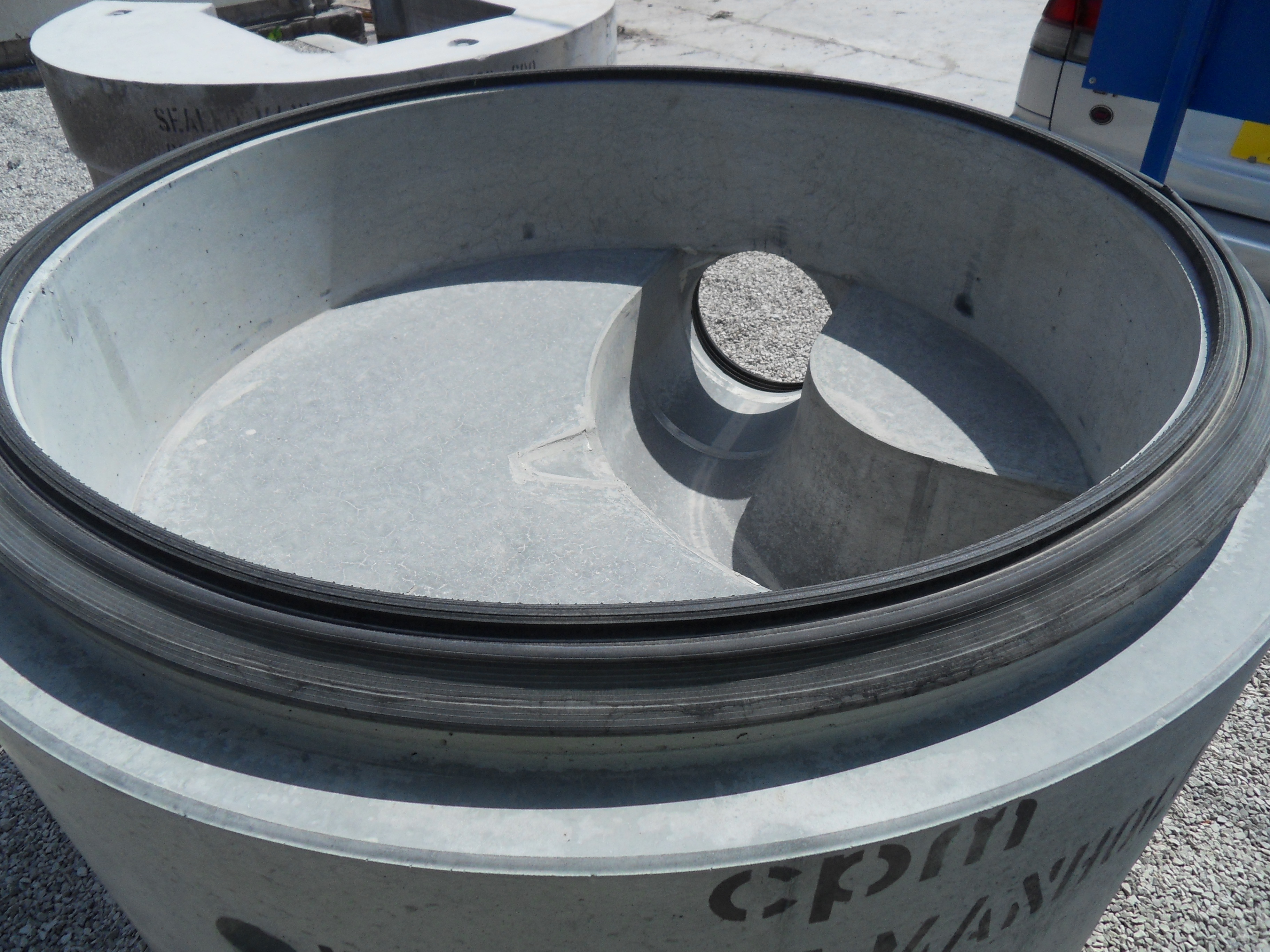 Once completed, Redrow’s Leestone Park housing development at Chamberlin Barn, Leighton Buzzard, will consist of 950 homes, shops, a local centre and a new lower school. The main project’s civil engineering & earthworks contractor, Fox (Owmby), were faced with the challenge of reducing the overall embodied carbon impacts of their operations. The Market Rason based contractor contacted Marshalls CPM to enquire about carbon-efficient solutions for the drainage systems.

Marshalls CPM proposed an offsite solution using their precast based “Perfect Manhole”, employing a range of 1200mm, 1500mm and 1800mm manhole systems. The choice was based on a study carried out a few years ago by international consultants Carbon Clear on different manhole systems which found that a precast sealed manhole system can have a 30% and 45% lower carbon footprint than plastic and traditional box-based concrete manholes (respectively). The use of the Perfect Manhole sealed system eliminates the need for concrete surrounds to improve watertightness and resistance to flotation. Carbon Clear also found that concrete pipes can lower the carbon emissions of construction by 35% on average compared to equivalent plastic pipes. A more recent study found that savings may actually double over the whole-life of a project as, unlike plastic manholes, precast based manholes are designed and manufactured to meet a 100+ years Design Life. Another advantage of precast-based systems is the ease and speed with which it can be installed.

James Stewart from Fox (Owmby) Ltd noted “this is the first time we have used Marshalls CPM sealed systems. We cannot believe how easy it is, with all the benefits that it offers we will continue to install the Perfect Manhole solution”. 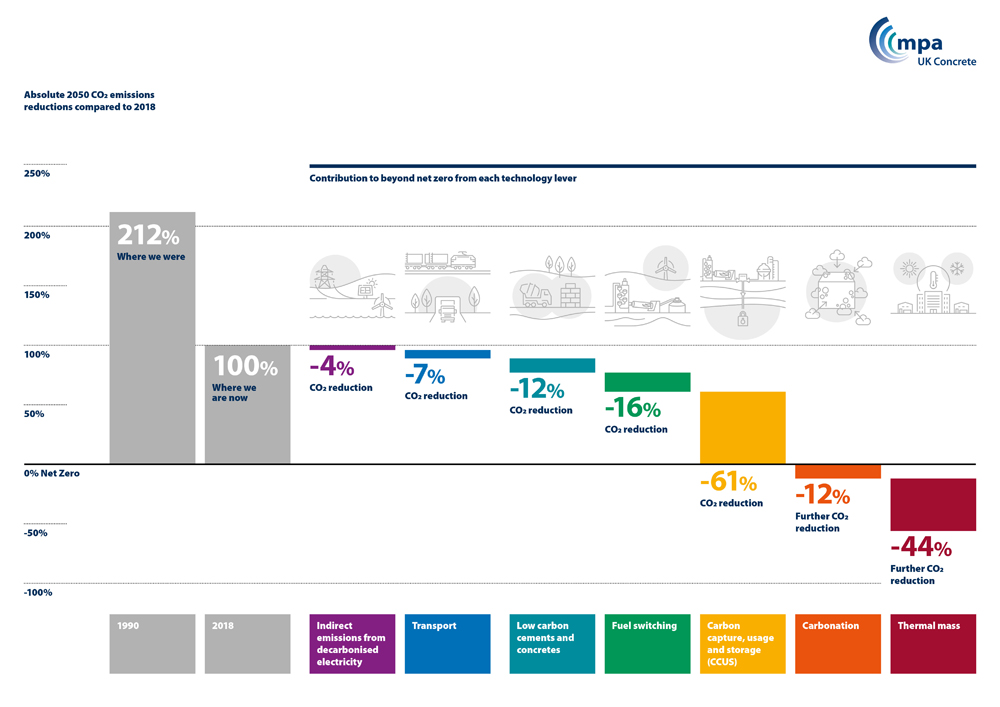 The roadmap, launched under the Mineral Products Association’s (MPA) concrete body “UK Concrete”, introduces a decarbonisation path using a wide range of technologies such as Carbon Capture, Use or Storage (CCUS), fuel switching and investment in new types and blends of low-carbon cement.

The announcement comes after similar roadmaps and initiatives were launched by the Global Cement & Concrete Association (GCCA) and the European cement association Cembureau earlier this year.

The UK concrete and cement sector has already been successful in reducing their carbon emissions by 53% by 1990. One interesting fact about this roadmap is that it does not account for any offsetting of carbon (the process of buying carbon credits from other sectors/ processes to compensate for own emissions) or outsourcing of any manufacturing activities. The initiative has already won praise from Chris Stark, Chief Executive of the Committee on Climate Change (CCC).

The initiative was developed in consultation with all MPA product associations and groups, including the British Precast Drainage Association (BPDA). BPDA recently published a study looking at the Whole Life Carbon emissions associated with drainage and sewerage pipeline solutions. The study, based on a model developed by the ICE Database authors, Circular Ecology, proves that concrete pipes can have a significantly lower carbon footprint compared to plastic alternatives. BPDA is already building on that study, and the Net Zero Roadmap, to develop their own initiatives toward lower carbon precast drainage products and Net-Zero carbon by 2050. 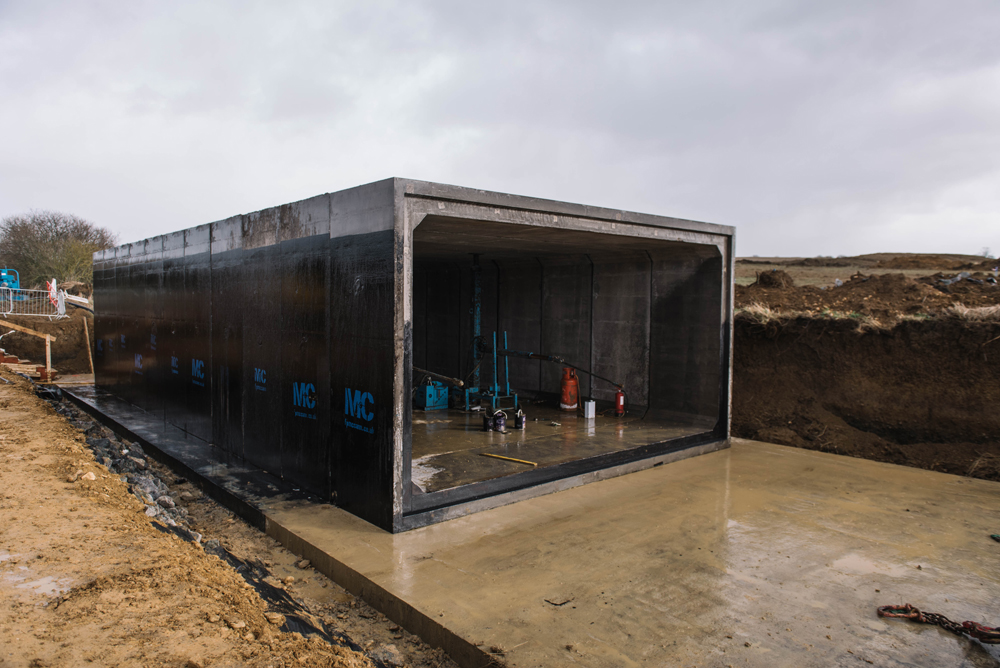 A box culvert installed at a Permissions Homes development at Weldon Park, Corby, may be the largest ever to be manufactured and installed in Britain.

The 28-metre-long culvert solution is made of 20 box culvert sections, each spans 6000mm and 3000mm high. The culvert channels an existing watercourse through the site. Specialist civil engineering groundworks contractors, Paul John Construction, needed a culverting solution large enough to channel the watercourse and with sufficient structural capability to carry an access road into the development. Precast concrete box culverts offered the ideal solution. The 20 large sections were manufactured at FP McCann’s Byley factory, weighing 22 tonnes each. The units were installed over a pre-prepared concrete bed base using a specialist crane and jointed with bitumen rubber sealing strips. Commenting on the culvert installation, Selwyn Bryers (Director for Paul John Construction) praised the box culvert team at FP McCann for their help in designing the offsite precast solution. He added that the units were installed within a very brief period “…demonstrating the flexibility that concrete box culverts can offer in such civil engineering project”.

In addition to the giant box culvert, the site required another six separate smaller culverts consisting of 102 box culverts units (2100mm x 1000mm). One of these required an inbuilt mammal ledge.

With a section area of 18m 2 , BPDA believes that the units used in this project are likely to be the largest monolithic box culvert units ever to be manufactured in Britain (at least in the last 2 decades). For more information on that case study, please contact FP McCann for more information: https://www.precastdrainage.co.uk/members/fp-mccann 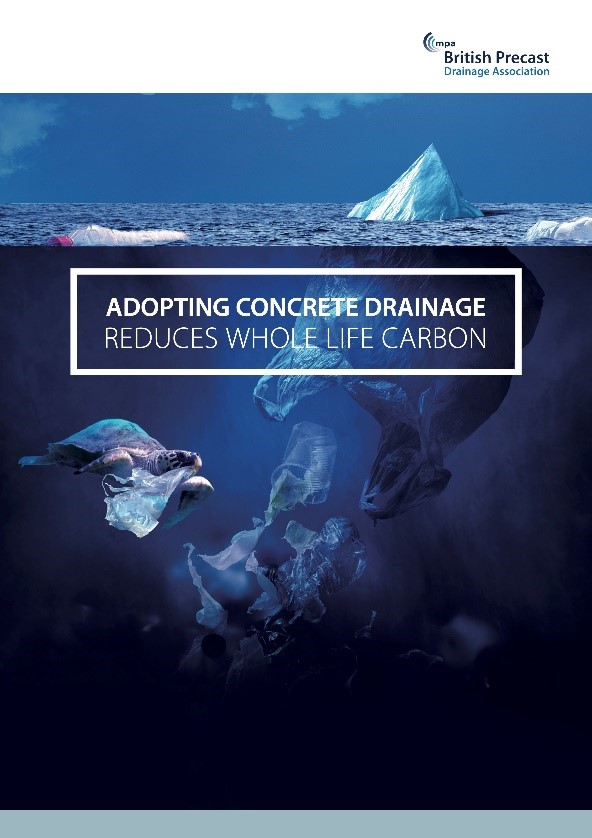 BPDA has published the results of a comparison study into the whole life carbon impact of concrete and equivalent plastic pipes, highlighting that concrete is the low carbon choice.

This year UK Concrete, the group representing the UK concrete industry will develop and adopt a new carbon roadmap to deliver a ‘net negative’ industry by 2050. The announcement means that the concrete industry is not only committing to meet the UK target of ‘Net Zero’ by 2050 but is also committing to removing more carbon from the atmosphere than the industry emits each year.

The concrete and cement industry has a strong track record, having already delivered a 53% reduction in absolute carbon emissions since 1990 and is decarbonising, as a whole, faster than the UK economy. At a British Precast level, since the launch of the Sustainability Strategy in 2007, manufacturing carbon emissions for the sector dropped by 43%.

One of the many steps on a roadmap to a future low carbon economy is selecting the right materials to build much needed infrastructure. The British Precast Drainage Association (BPDA) is publishing the results of a comparison study into the whole life carbon impact of concrete and equivalent plastic pipes, to highlight that concrete is the low carbon choice. The study draws on a sensitivity analysis carried out by external consultancy Circular Ecology, which allowed British Precast to model the impact of both concrete and plastic pipeline systems.

The findings show that at the majority of pipe diameters, when plastic pipe ring stiffness and resin sources are evaluated, installed concrete pipes have lower embodied carbon (measured in GWP = Global Warming Potential) than plastic alternatives. For large diameter pipes the difference is the most marked with the GWP impact as much as 47% higher than that of a concrete equivalent (assuming equal service lives).

When the full pipeline lifecycle in taken into consideration the BPDA believe that the GWP impact of a plastic pipeline could be more than double the impact of a concrete pipe due to concrete’s longer service life.

The RICS (Royal Institute of Chartered Surveyors) has long believed that it is crucial that specifiers make decisions based on the whole life carbon of construction products, rather than cradle to gate or partial studies which are essentially the ‘tip of the iceberg’. Looking at the full picture on emissions is a key theme of the document.

The BPDA adopted a ‘whole life’ principle similar to that advocated in PAS2080 right at the start of the project. Data in the study is based, where possible, on Environmental Product Declarations, like the BPDA DN600 example published in 2017. The study covers not just the creation and transportation of the pipe itself, but also the excavation and transportation of the required bedding material. Further considerations include the demonstrable 120+ years’ service life of concrete pipes compared to just 50+ years for many plastic pipes, a variable which is vital if projections of an 800-year service life requirement for UK water assets bare out. End-of-life scenarios are also considered including the potential need to incinerate the plastic pipe waste at the pipeline decommissioning stage, while concrete pipes can be dug up and reused elsewhere or broken up and recycled, allowing for carbonation to take place removing CO2 from the atmosphere.

When all these facets across the full life of the products are considered, the difference in global warming potential impact is stark. The graph below shows the relative impacts of comparable DN2100 pipes where resin is imported from outside the EU – here concrete pipelines have less than half the carbon impact of plastic pipes.

As a specifier, your choice of precast concrete pipes provides the opportunity to save carbon across the whole life of a pipeline. Lower carbon through design, significant extension of the working life and concrete carbonation at the end of life. 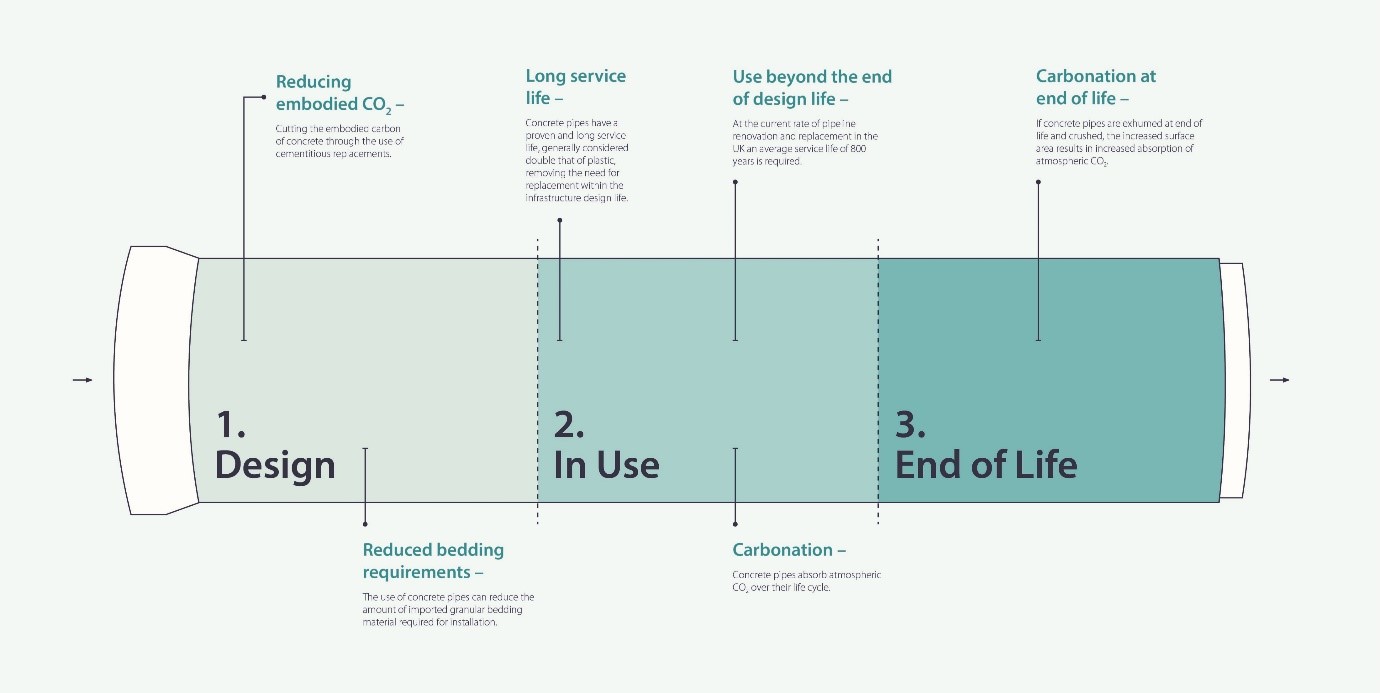